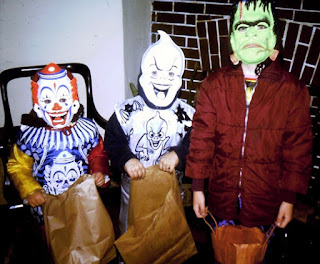 Posted by Boys and Ghouls at 2:03 AM No comments:

It's been a few years since I've added to the "Boys and Ghouls" blog. I've made a podcast a month for the last 34 months and here's some things I've learned: First of all, if the computer you're recording onto has a fan, don't record to close too it. The microphone picks up the fan and everything sounds like hell. Our third episode was just-about wrecked from that.

Second, if you're just starting a podcast, start with its Twitter account. If the name of your podcast is already taken on Twitter, just pick a new name. It's not like Twitter is legally binding or anything. But, maybe its the way Twitter will verify some accounts that makes people perceive what's on Twitter as the real deal or the final word on a subject. You might have your own web site for your podcast but, too often, a web site can just be like a ghost ship on the internet, sailing un-updated for years. And, too often, folks don't put the year on their posts. A web page will say "ON MARCH 14th, THIS AWESOME THING IS HAPPENING..." without an indicator if this is current information or it refers to March of three years ago. Web pages aren't like newspapers, you can't tell an old one just by looking at it. And so, people are just more likely to trust what's on Twitter. Everything posted has the day, month AND year.

So, there you are. Twitter. It's popular for a reason.

At Boys and Ghouls, we try different methods of promoting our podcast and, I really don't know which one brings people in the most, but we get a lot of listeners (a lot being about 400 hits in the first month of any new episode and about a hundred hits on that episode every month after that). The thing I do the most is promote on Pinterest. It's a good way of finding people with an interest in the subject of your podcast. And, every photo you post can contain a link to your podcast. If anyone repins one of your photos, they take that link over to their page. Right now, Boys and Ghouls has almost 4,000 horror movie related photos on Pinterest. Some on these photos get repinned a little, some get repinned a lot. That's a lot of links out there, getting onto the screens of like-minded people who might be interested in giving our podcast a listen.

Tumbr used to let users link their web sites to the photos they post, but not anymore. However, if you post your own photo on Tumblr (not just repost one) you can have a web address accompany the photo. Regardless, like Pinterest, the benefit of Tumblr is that when you "like" or repost a picture, the original poster of that picture will get a notification that such-and-such-podcast likes their picture. Like and repost enough pictures from people with your interests and maybe they'll become listeners.

Also, join free blog sites and put up good content that will attract people interested in your podcast's subject. Be sure to write your podcast's name from time to time (Boys and Ghouls Podcast) so Google searches have something to bring up. If the name of your podcast is only used in the banner of your blog, it could be overlooked in a search.

A final piece of advice is this, don't bury the lead in you episode titles or descriptions. On iTunes, a title or description gets cut off after so many characters. So, don't start your title with the name or episode number of your podcast. Like, "Boys and Ghouls: The Lost Boys". Someone searching your episode titles, especially on a mobile device, will only get to read the first few characters. The same goes for the episode's description. So, always write what is key about your episode first. Let it be visible in its abbreviated form. And then, after you've made your point, you can be clever or amusing with your description. I hope this has all been helpful to you. 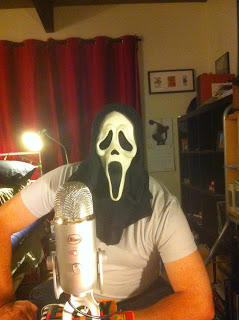 Posted by Boys and Ghouls at 11:25 AM No comments:

Vampire strippers and vampire hookers! Kat and Marshall explore this horror sub-sub-genre through three fun and sexy movies; Vamp, From Dusk Till Dawn, and Tales from the Crypt's Bordello of Blood. Also, Kat discusses Vampire trivia and Marshall shares his trip through a carnival spook house. You can listen to the player here to our second episode, "Ladies of the Night". Enjoy!

Podcast Powered By Podbean
Posted by Boys and Ghouls at 9:41 AM 2 comments:

White Zombie advertisement (Hobbs, NM 1940). Was used for the inside spread of the “La Sexorcisto” CD booklet. Photographer: Russell Lee 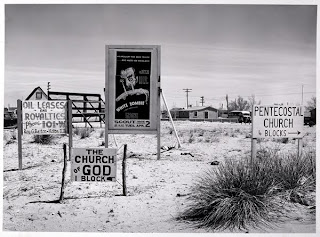 Posted by Boys and Ghouls at 12:13 AM No comments:

Listen here to our first episode as we take a look at Nightmare on Elm Street 2: Freddy's Revenge...


Podcast Powered By Podbean
Posted by Boys and Ghouls at 10:16 PM 4 comments:

The Genesis of a Thumbnail

We're getting very close to putting out our very first episode of Boys and Ghouls.  I went to Guitar Center and picked up a Yeti USB microphone and a red sheet set from Target.  Kat came over and we had a photo shoot where I wore a halloween mask and skeleton gloves.  I mostly did Scooby-Doo monster-style creeping poses while she did scream queen reactions.  An old room mate had attached some halogen lights to the rafters of my apartment, part of a set-up for an at-home green screen, and left them up there when he moved out.  I just tacked up the red sheet I got at Target, plugged in the lights, and used a regular Coolpix digital camera for what turned out to be a pretty good shoot.

I figure that since our podcast's thumbnail will be literally the size of a thumbnail, a Pulp Fiction shade of red might catch a web-browser's eye.  When it came to giving the picture text, I didn't have Photoshop.  So, I went to a d.i.y. de-motivational poster site and got some good, simple results. 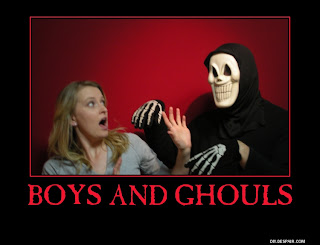 Kat and I recorded about an hour and half of us just talking about Nightmare on Elm Street 2: Freddy's Revenge.  I've edited it down to about 45 minutes.  Doing this, I removed our pauses, and stammers, and when we would gather our thoughts with a lengthy, "uhhhhhh."  We ended the podcast with the sign off, "Beware the moon" and a closing clip of Bela Lugosi in Glen or Glenda telling the audience to "Beware, take care... beware."

After editing, I recorded a pre-podcast greeting to tell folks what to expect and to follow us on Facebook.  I looped some bubbling and zapping sounds from Youtube and created a mad scientist lab to go under my minute-long greeting.

Since then, as our Friday the 13th drop-date approaches, I've been trying to increase Boys and Ghoul's online presence.  Right now we've got a Facebook fan page that has reached the thirty members that it takes to get the extra bells and whistles.  For anyone still on Myspace, I created a Boys and Ghouls Myspace page too.  And, you can find us on Tumblr where, right now, our only follower is Kat.

Then, a friend introduced me to Pintrest.  Its set-up of user's interest boards, where they showcase images from all over the web, has helped me find lots of folks (mostly female) who are into horror movies.  Then, when I "repin" one of their postings over to my own page, they get a notification that "Boys and Ghouls Podcast" has repined one of their items.  Today, after a week of searching out horror fans, trying to generate interest about my unreleased podcast, I found that a horror fan in Florida actually found out about us through Pinterest then followed a link and "liked" our Facebook page.

So, that was pretty encouraging.

One more day till Friday the 13th, then I'll have an actual product to promote.
Posted by Boys and Ghouls at 12:11 AM No comments:

Whispers in the Night

I've been splicing and dicing all week as I learn how to edit sound on Garage Band.  As a project, I'm constructing an opening sequence for my podcast.  It's a montage of sound bites from various horror films.  The best tool I've discovered in this project has been a website that converts You Tube clips into mp3's.  Since most of a movie's best lines are in the trailer, I've been scouring You Tube for horror movie trailers, hoping to find clips of characters verbalizing their situation (like Clint Howard in The Wraith letting us know that he was up against, "A wraith, man!  A ghost!  An evil spirit and it ain't cool!")

The most discouraging part of this process is discovering how softly people talk in horror films, especially dialogue that addresses the movie's specific terror.  I was hoping for dialogue where people spoke loudly and clearly about psycho killers, vampires, zombies, werewolves, etc.  I'm discovering that in most horror movies, before the rampage really gets going, characters speak very quietly when first mentioning monsters, so as not to appear crazy.  Then, when they find themselves in serious danger, they speak softly so the monster in the next room can't hear them.  After that, the loud dialogue is usually just a lot of screaming.  Some great lines that I went looking for are softer than I remember.  Like, when Fred Gwynne lets us know that, "Sometimes, dead is better."  And the majority of Heather Langenkamp's performances are delivered in cautious whispers.

The movies that delivered the best sound bites were the horror-comedies.  Going for a laugh, the characters of these self-aware movies will speak clearly and frankly about whatever monsters are giving them trouble.  One of the best is Dom DeLuise as Aunt Kate in Haunted Honeymoon, getting everyone's attention at dinner to announce, "I know that one of you is a werewolf."  In Near Dark no one even uses the word "vampire" through the entire movie.  But, in Dracula: Dead and Loving It vampires are mentioned in the first five minutes.  So, most of my completed montage is from horror comedies and, put together, will start the podcast with a jolly tone.

For well-annunciated straight talk about the undead that you can weave into a sound bite montage, the best source is the horror movie trailer announcer.  When I went looking for clips, the first thing I located was an old trailer for Plan 9 From Outer Space.  Before I'd ever heard of Plan 9, I'd heard "Cosmic Monsters Inc" by White Zombie.  Under a bed of metal guitar was the 1950's trailer declaring, "They come from the bowls of hell.  A transformed race of walking dead..."  Years later, watching an Ed Wood documentary, I delighted in discovering the source of that sample.

So, I've included the Plan 9 clip in my montage, along with some other fun drops that you might recognize... just as soon as I record a podcast and make it available to download.

Posted by Boys and Ghouls at 11:02 PM No comments:

Boys and Ghouls
Blog for Boys and Ghouls, a horror movie podcast hosted by a warm and engaging duo. Check us out at http://boysandghouls.podbean.com/